Posted on September 15, 2015 by comicspectrum 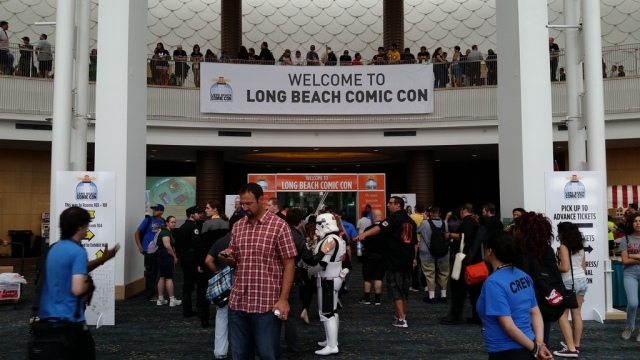 Another Long Beach Con is over and I’ve had a few days to reflect on it.  I still think this is a great showing for a mid-sized regional con.  It’s certainly not San Diego and I don’t think it’s trying to be.  That said, the people attending all seemed to be having a great time, which is really what’s important.

I’ll focus on both my personal observations as well as what I got from talking to other people.

My thoughts
As always, I was there for comics. I was REALLY pleased that the Artist’s Alley section was right in the middle of the show floor instead of being exiled off to a far away corner (like in San Diego).  I has a great time cruising around the artist’s alley area talking to creators like Art Adams, Tim Bradstreet, Josh Fialkov (who gave me an autographed copy of King #2, his nifty new post-apocalyptic comic series!), Don Glut, Joe Harris, Richard Starkings, Marv Wolfman, Len Wein, and many more.  This is always the highlight of a convention for me, I love making that personal connection with the people who create the comics I love, if only to shake a hand and let them know how much I’ve enjoyed their work.  Typically I get the bonus of having a much longer and more meaningful conversation and it’s this one-on-one interaction that makes a comic con so special to me.

What about comics for sale?  There were a lot of really great comics dealers with older books.  Way more than I had budget for.  I focused on a couple of guys I’ve gotten good deals from in the past and skipped the rest, though there was so much to choose from I wished I had $100s more to spend!

The third part of my “comic con triumvirate of comic-y goodness” is the panels.  This is where Long Beach could use some improvement in the comics department.  There were 3 panels that were really interesting to me, and, as luck would have it, they were all scheduled opposite one another so I could only attend 1 of them.  The panel I chose to attend was “Creating Dynamic Covers” with Stuart Immonen, Dustin Nguyen, Andy Kubert, and Kris Anka talking about their artistic process and designing covers while talking to cover images projected up on the screen by the panel moderator.   THIS is the kind of thing I wish there was more of.  As luck would have it, I ended up sitting right behind Robert Kirkman, who was there with a couple of buddies, sitting in the audience with the rest of the fans because he loves comics too!

Long Beach tends to schedule a lot of “how to break into the business” type of panels at this con.  I sincerely hope that the majority of con-goers are not just wannabe industry members.  To sustain comics there needs to be more fans who just want to consume the comics than there are people MAKING the comics.  I don’t think there’s anything wrong with “how to” panels, but they should be outnumbered by comics panels focused at fans who just like reading the comics.  I’d like to see a lot more panels featuring creators talking about the stuff they’re creating.

Other People’s Fun
There was a crazy long line for badge pickup around noon Saturday.  I think a lot of people all showed up around the same time or something, because lines were not that bad earlier.  On the plus side, it meant a lot of people wanted to be there.  I have a friend who waited in line around this time for a bit over 30 minutes and he was still in good spirits when he got into the con around 12:45 and went right down to the show floor.

There was a lot of Cosplay.  For people who dig that, there is a lot going on.  I talked to a number of people who were having a great time both wearing and taking photos of people wearing costumes.  This is a highlight of a con for many people and one of the primary elements the media latches onto, making any comic con seem like a place where 90% of the people are dressed up when it’s actually more like 10%.
Celebrities.  Again, not my cup of tea, but people who want an autograph or photo op with a celeb, there were a bunch to choose from.  Not A-List talent, but some decent celebs like John Barrowman and Chloe Bennett for people to get pictures with.

An Unexpected Pleasure
The was a track of the con focusing on space run by the local SoCal Columbia Memorial Space Center.  Kind of a strange combo with comic books, but I like space travel and in absence of a bunch of comic book panels I sat in on a few of these and they were absolutely fascinating!  There was a presentation from the folks at Virgin Galactic, and also a panel with engineers who worked on the space shuttle program.  It was a hoot to listen to these guys rail about what dunderheads upper management at NASA were.

Wrapping up the Day
The best way to wrap up a day at a comic con is hanging out with friends.  One of my friends had developed an interest in “Squaddies” (Marvel Super Hero Squad figures), and I had a big pile of them in a bin in my garage, I brought 30 figures for him.  He decided it would be fun to pile them up and see how high a tower could be made stacking them before it would topple.  Something fun to do while waiting for food at Rock Bottom Brewery!

Summary
I really like this show, but I really wish they’d try to sell it more on comics, but that’s maybe a total pipe dream on my part.  They’re pushing the things that get people in the doors, which nowadays is cosplay, celebrities, and general pop culture.  If people who are drawn in by those are incidentally interested in comics that’s a bonus, but to some extent I cannot blame them for not having “pure comics” panels because they’re not attended anywhere near as much as the general pop culture panels.

Are the panels not well attended because there is little advertising/awareness, or just because there’s really not a lot of interest?  I don’t know for sure, but most “comic” cons tend to focus more on general pop culture as opposed to comics, so it’s nothing unique to Long Beach.  Regardless, if you like pop culture with a side order of comics, head on out to a future Long Beach Con if you’re in the LA area.

The goal of ComicSpectrum is to provide a one-stop reference for everything about & related to comics and comics culture.
View all posts by comicspectrum →
This entry was posted in Comic Cons. Bookmark the permalink.