Flying Below the Radar: October 2014

Posted on September 26, 2014 by comicspectrum

This is a Blog I do once a month as I read through the advance solicits for comics shipping in two months.  Every month your local comic shop (LCS) places orders with Diamond Comics for what comics will be on their rack two months down the road.  That means in October they’re ordering the things that they’ll be selling in December, 2014.

This month we have a lot of great items that could have flown below your radar!  The United Federation of Planet of the Apes!  Fabulous examples of art showcased by IDW yet again!  A whole bunch of great Darwyn Cooke covers from DC!  Alan Moore comes back to comics!  2 separate cult movie icons!  Check out these and many more comics that could have easily flown below your radar!  I cover lots of cool stuff that you may miss if you’re not reading though all the solicits like I do…  I scour the solicits so you don’t have to!

Comic shop owners are typically aware of the books from the big publishers particularly superhero stuff and “hot” indie books (usually AFTER they become hot) – beyond that there are no guarantees.  Even if they know about a particular comic they may not order it to put out on their racks.  I keep track of advance solicits that get posted on-line on the ComicSpectrum website each month, if there is something you really want that’s not guaranteed to be on the rack (like Batman or Avengers), you should consider letting your comic shop know you’re interested so they’ll know to order it.

Most of the items shown here are things you may not see on the racks in every comic shop.  If it looks cool to you, make sure you ask your LCS to order it.  Heck, start a pull list at your shop and add the books you’re interested in so your shop will save them for you and you don’t have to worry about them selling out.

STAR TREK/PLANET OF THE APES #1 [IDW]
Scott & David Tipton (Writers) • Rachael Stott (Artist)
It’s the crossover nobody ever expected! STAR TREK: The hope for the best of mankind’s future! PLANET OF THE APES: A chilling look at the fall of humanity! How could these worlds possibly collide? What could possibly cause Captain Kirk and the crew of the Enterprise to side with Dr. Zaius to protect Ape City? And what does Colonel George Taylor have to say about it? It’s a madhouse! A madhouse!!
FC / 32 pgs / $3.99 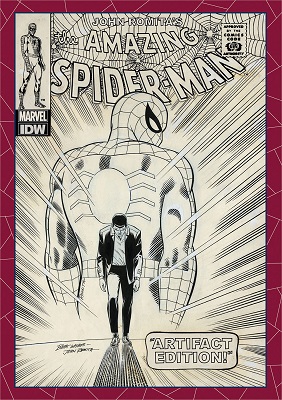 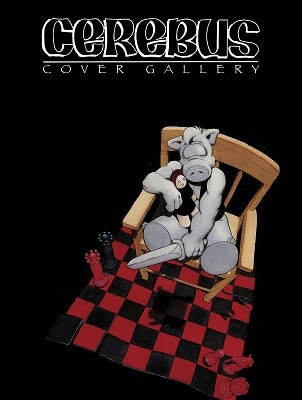 JOHN ROMITA’S AMAZING SPIDER-MAN ARTIFACT EDITION HC [IDW]
Stan Lee (Writer) • John Romita, Sr. (Artist)
This is it, the John Romita Spider-Man book fans have been waiting for — Nearly 200 pages of prime John Romita Spider-Man art from his very earliest days on the title, and every single one is scanned from the original art! This over-sized (it’s as big as the recent STERANKO Artist’s Edition) Artifact Edition showcases the absolute peak of Romita’s tenure on Amazing Spider-Man from his first 15 issues (#39-53), and all are twice-up pages — this one is an enormous 15″ x 22″ tome! NOTE: An Artifact Edition is similar to an “Artist’s Edition” but does not present complete issues, typically because all of the art was not able to be located and scanned.
FC reproduction of B&W art / 200 pgs / ~$140

CEREBUS: COVER GALLERY [IDW]
Dave Sim & Gerhard (Artists)
Dave Sim is one of the most important cartoonists in comics history. His groundbreaking Cerebus ran for 300 issues, each written and drawn by Sim — a monumental achievement! Now, through IDW Publishing, Sim’s beautiful covers are reproduced in an archival over-sized hardcover, and many of the illustrations have been scanned from Sim’s personal collection of his original art. Also collected are roughs, color guides, sketches, and other historical images that chronicle this very important artist’s creative process.
FC / 432 pgs / $75

DARWYN COOKE VARIANT COVERS [DC Comics]
Darwyn Cooke (Artist)
This December, DC will be releasing 23 different variant covers rendered by Darwyn Cooke and each will be a separately orderable “common variant” so let your LCS know if you want these.  Each cover is presented as a landscape image running horizontally on the front of the comic. And rather than sticking to just the New 52 character designs, Cooke will be providing a mix of contemporary designs and the Silver Age throwback style seen in comics like DC: The New Frontier.
The variant covers will be offered for the following comics and should be sold for normal cover price by any reputable comic shop:
Action Comics #37, Aquaman #37, Batgirl #37, Batman #37, Batman & Robin #37, Batman/Superman #17, Catwoman #37, Detective Comics #37, Flash #37, Harley Quinn #13, He-Man: The Eternity War #1, Grayson #5, Green Lantern #37, Green Lantern Corps #37, Justice League United #7, Justice League #37, Justice League Dark #37, Teen Titans #5, Sinestro #8, Supergirl #37, Superman #37, Superman/Wonder Woman #14, Wonder Woman #37

THEY’RE NOT LIKE US #1 [Image]
Eric Stephenson (Writer) • Simon Gane & Jordie Bellaire (Artists)
Eisner-nominated NOWHERE MEN writer ERIC STEPHENSON teams up with red-hot artist SIMON GANE for an all-new ongoing series! We all have advantages over one another, but what if you were capable of things most of us can only imagine? What would you do – and who would you be? A doctor? An athlete? A soldier? A hero? Everyone has to make a choice about how to use the abilities they’re born with… but they’re not like us.
FC / 24 pgs / $2.99

GRAVEYARD SHIFT #1 (OF 4) [Image]
Jay Faerber (Writer) • Fran Bueno (Artist)
Reunited after their memorable run on the critically acclaimed NOBLE CAUSES, JAY FAERBER and FRAN BUENO bring you a new tale of crime, horror, and romance! It’s Fright Night-style thrills and Castle-style crime-solving as a homicide detective and his girlfriend find their love put to the ultimate test when they run afoul of a gang of vampires!
FC / 32 pgs / $3.50

ARCHIE COMICS 1000 PAGE COMICS MEGA-DIGEST [Archie]
various (Writer) • various (Artist)
There’s always room for more merriment from Archie and his pals ‘n’ gals! Get ready for 1000 more mega-pages of hijinx and hilarity! For over seven decades, Archie and his friends have been making everyone laugh, with their dating hijinx and misadventures at Riverdale High School! Everything’s Archie in the largest Archie collection series EVER—offered at an incredible value price!
FC / 1000 pgs / $14.99

PARALLEL MAN: INVASION AMERICA #3 (of 7) [Future Dude]
Jeffrey Morris & Fredrick Haugen (Writers) • Christopher Jones (Artist)
Take a thrilling ride across the Multiverse with Agent Nick Morgan, a super-soldier gone rogue, as he fights to prevent the evil Ascendancy from enslaving alternate Earths! For over 40 years, the Ascendancy has pillaged other worlds—now its sights are set on us!
This title “flew below my radar” until Adam reviewed it on ComicSpectrum. Now I’m pre-ordering issues!
FC / 32 pgs / $3.99

CROSSED + ONE HUNDRED [Avatar]
Alan Moore (Writer) • Gabriel Andrade (Artist)
Set in the world of Crossed but leaping 100 years into the future of the epidemic outbreak that has set uninfected humanity fighting for their lives against animalistic hoards of attackers. This new project is Crossed +100, and not only has Moore written the series, he has even personally designed the covers for this new take on apocalypse and survival. Moore became interested in the Crossed series via friend Garth Ennis, and the two, speculating about what the future might hold for humanity and for the planet itself, came to conclusions that spurred Moore into authorship on the new series. Moore examines the logic, and even science, behind a Crossed future, the world he envisions, and how a lack of information may well be as great a threat to human culture as the epidemic itself.  Read an interview with Moore about the series here.
FC / 32 pgs / $3.99

ANOTHER SUBURBAN ROMANCE GN – COLOR EDITION [Avatar]
Alan Moore (Writer) • Juan Jose Ryp (Artist)
One of the seminal works from the writer who defined modern comics, ALAN MOORE, is re-mastered for the first time in breathtakingly vibrant color! Alan Moore’s performance works making up the play Another Suburban Romance are translated into print and lavishly illustrated as full sequential stories. Comprised of three major pieces, adapted from Moore’s original presentations by frequent collaborator Antony (Fashion Beast) Johnston, this original graphic novel is completely illustrated by Juan Jose Ryp. Running from the 1920′s Chicago style killings in Old Gangsters Never Die, to the ruminations on modern life in the namesake piece Another Suburban Romance, this powerful work is an essential piece of the Alan Moore graphic novel library that no fan will want to miss!
FC / 64 pgs / $9.99

THE VALIANT #1 [Valiant]
Jeff Lemire & Matt Kindt (Writers) • Paulo Rivera (Artist)
For thousands of years, the Eternal Warrior has stood as the guardian of the Valiant Universe. A protector of the enigmatic Geomancers — powerful wizards who help shape humanity’s future — the Eternal Warrior has sacrificed everything when called upon to do so. And now he must do so again.
Kay McHenry — the newest Geomancer — is lost in her new role. Little does she know that the Immortal Enemy — a vicious, force of nature with a penchant for chaos — has her in his crosshairs. His return marks a new era of darkness. Now Bloodshot — and the rest of the heroes of the Valiant Universe — must band together to stop this unprecedented force of destruction.
FC / 32 pgs / $3.99

ROCKET SALVAGE #1 (OF 6) [BOOM!/Archaia]
Yehudi Mercado (Writer) • Bachan (Artist)
Primo Rocket used to be the fastest speeder-racer in the galaxy, but after a crash that sealed the fate of his space-station-city home, Rio Rojo, Primo has resigned himself to life as a lowly spaceship salvage yard owner. However, his two “kids”–harvest clone Beta, and Beta’s genius girl-clone Zeta–can’t seem to keep out of trouble. When the dysfunctional family suddenly becomes the target of an intergalactic manhunt, the family has to come together to save their home.
FC / 32 pgs / $3.99

ESCAPE FROM NEW YORK #1 (OF 6) [BOOM!]
Christopher Sebela (Writer) • Diego Barreto (Artist)
The crime rate in the United States has risen 400 percent. After humiliating the President in front of the world and destroying America’s one chance to end World War III, Snake Plissken has become America’s Most Wanted man in a land of criminals and the insane. Everyone wants Snake dead. Luckily, Snake knows the feeling all too well. War hero. Outlaw. Renegade. Snake’s back!
FC / 32 pgs / $3.99

ETERNAL #1 (OF 4) [BOOM!]
Willaim Harms (Writer) • Giovanni Valletta (Artist)
In a world of clones, the Human Liberation Army wants to free people from New Life’s grasp. Their leader Gail will take the most drastic, personal measures yet to do so. Rathmann, a former homicide detective turned New Life enforcer, is on the case, and is asking tough questions. Violet, a young girl and one of the few non-cloned humans (Pures, they’re called) left, is longing to enter the real world. But she has no idea the danger she is stepping into.
FC / 32 pgs / $3.99

SHAFT #1 [Dynamite]
David Walker (Writer) • Bilquis Evely (Artist)
Who’s the black private dick that’s a sex machine with all the chicks? Shaft! Created by author Ernest Tidyman, and made famous in a series of novels and films, iconic hero Shaft makes his comic book debut in an all-new adventure. He’s gone toe-to-toe with organized crime bosses, stood up to the cops, squared off against kidnappers, and foiled assassination attempts. But who was John Shaft before he became the hardboiled investigator with a reputation as big as New York City itself?
FC / 32 pgs / $3.99

DOC SAVAGE SPECIAL #1 [Dynamite]
David Walker (Writer) • Kewber Baal (Artist)
Known as the cousin of world famous adventurer Doc Savage, Pat Savage wants nothing more than to prove she has what is takes to be a hero. What starts out as a thankless job as a babysitter, soon turns into an epic life-and-death struggle that finds Pat squaring off against sinister forces. It’s a double-size tale of two-fisted action starring the first lady of pulp adventure, Pat Savage, Woman of Bronze.
FC / 48 pgs / $7.99