CREDIT: All photos by Bob Bretall.  All characters and comics copyright their respective owners.

Free Comic Book Day is really something special to me.  The holiday is the first Saturday in May and has been going on since May 4th, 2002.  I first started making sure I didn’t miss it in 2003 (it snuck up on me that first year!)  People who know me know that I’m a bit more hardcore about my comics that many people.  I make sure that the day is clear of other commitments and make sure to plan out my FCBD in advance.  I had already checked the web-page, Facebook page, or called up 10-12 different shops in the SoCal area during the weeks leading up to May 3rd to check and see what was going on.  I knew I was going to visit Nuclear Comics and Comics Toons’n’Toys (I do every year), but I was wide open on what other shops I’d visit.

My thought process is that since I have a LOT of comic shops to choose from in Southern California, I’m going to focus on shops that are doing something SPECIAL.  Are you having a sale?  This is a MINIMUM for  me.  Make an effort, shop owner.  I know you’re tossing me some free comics and I want to shop at your store and help repay the generosity, but meet me in the middle and have one of your yearly sales coincide with FCBD.  Are you having creators at your shop?  Something else special?  Catch my eye.  Please understand that you’re not the only game in town if your shop is between Santa Barbara and the Mexico border.

If you want to see some of why I love FCBD read along and see what I did last Saturday, May 3rd, 2014!

As always, my first stop was Nuclear Comics in Laguna Niguel.  They open early on FCBD (9am), don’t limit the number of comics you can grab but stipulate that you should not take a book you don’t plan to read (fortunately for me, I read them ALL!) AND they typically have a great sale too. 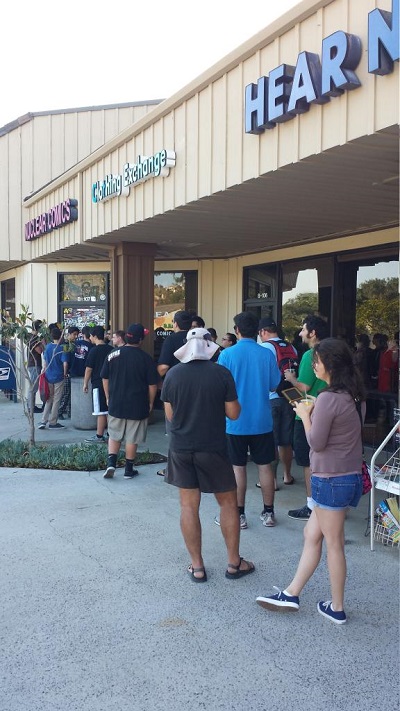 I got there at 8:30 and there was already a decent sized line (about 25 people). 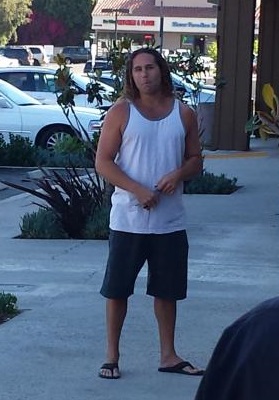 Right before 9am, Kenny, the owner, came out and announced the rules and talked about the sales.  30% off TPBs & HCs, 50% off all back issues, 50% of all books “on the rack” except the current week’s books, and a BUNCH of long boxes of $1 books out in the back parking lot!   Good times!  By the way, does Kenny not look like the perfect guy to be running a shop just a few miles from the ocean in Laguna Niguel? 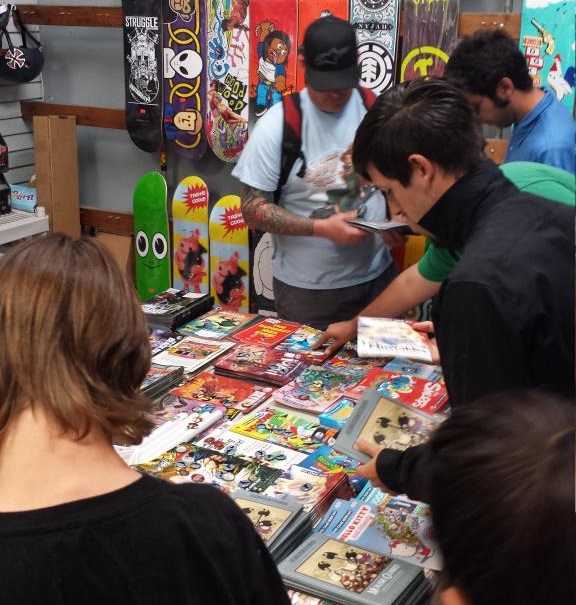 Let the Free Comics begin!  I ended up getting about 45 of the comics being offered from Nuclear.  Then I hit the sale and ended up with about 50 comics from the rack (I’ll be giving a LOT of DC/Marvel books I had dropped another chance for 50% off), a few back issues, and several hardcovers.  I dropped a decent amount, got some good deals, and didn’t feel like a cad for grabbing a bunch of free comics and fleeing without spending a dime.  I picked up the Stuff of Legends Omnibii (Vol 1+2) and the HC of Capote in Kansas among other things!  But, comics wait for no one, especially on FCBD…  Time for my next stop! 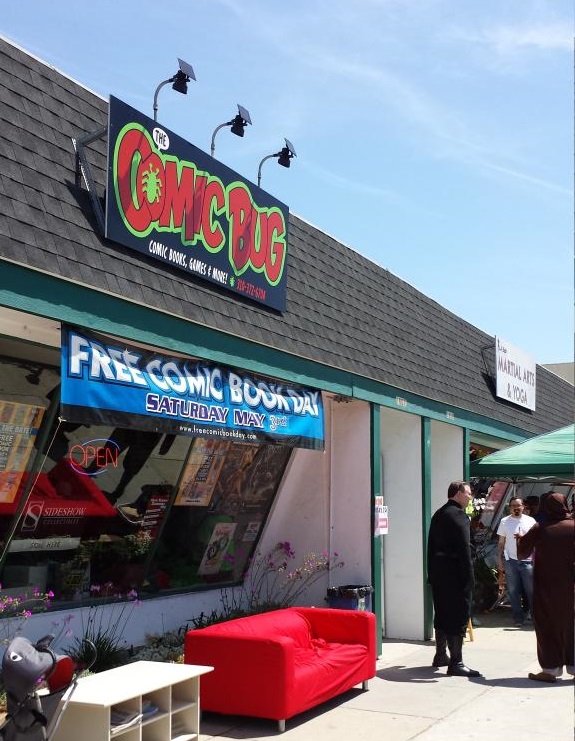 53 miles to the north and my second stop at the Comic Bug in Manhattan Beach!  Why visit this shop?  All about the creators! 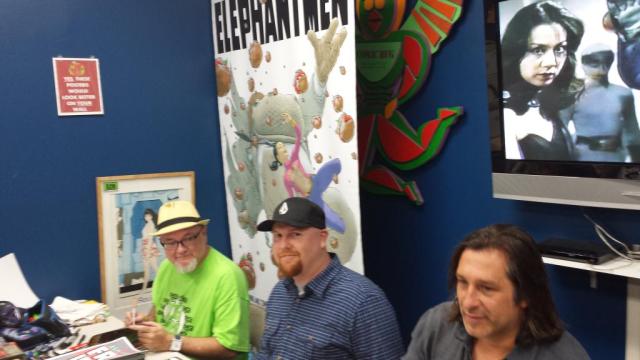 They also had characters in costume!  When I drove up there was a guy in a Spider-Man costume perched on a parking meter in a very authentic “Spider-Man on a flagpole” kind of pose.  I wish I had a picture of that, but I chose not to get in a traffic accident…   Here’s the Wonder Woman who was inside the store, she was taking pictures with a lot of happy kids.  With a few happy adults too! 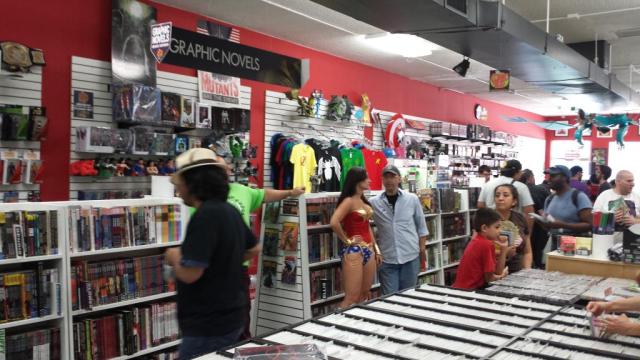 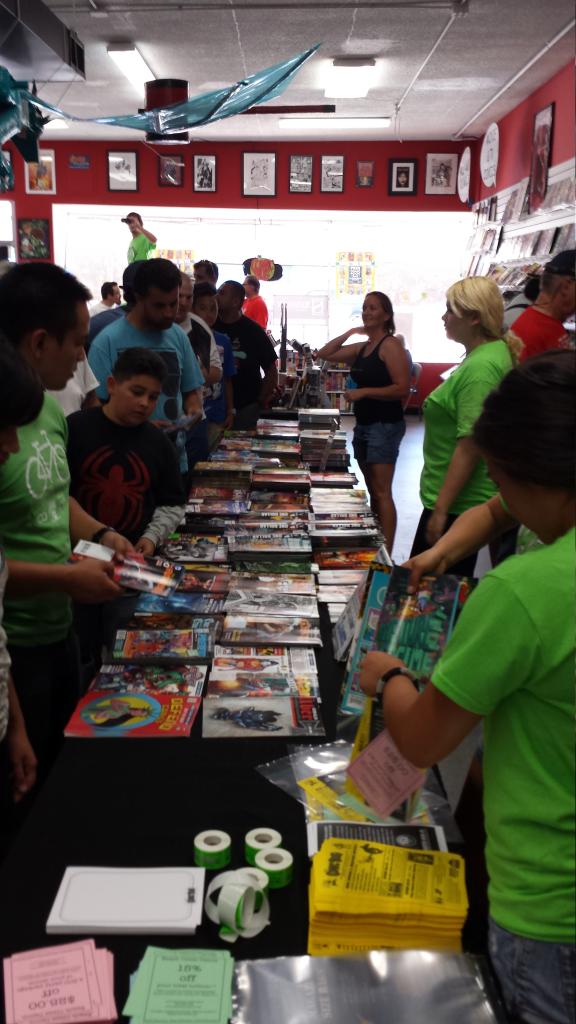 And look at all those free comics I skipped!  Well, I was high on the big pile I got at Nuclear, so I proceeded directly to the creators.  I picked up a couple of creator-owned comics from some of the local artists there and got some small sketches too!  Here are the some of the books I picked up from Nuclear + Comic Bug, as well as the small sketches: 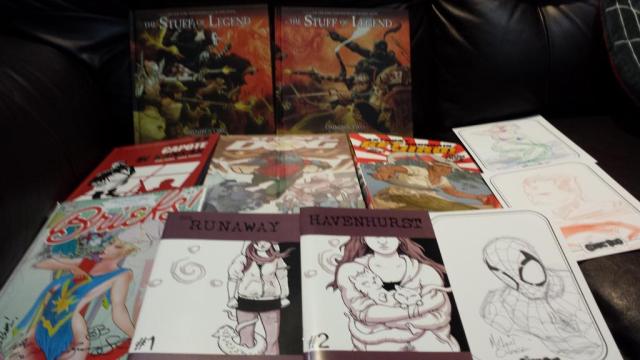 The highlight of Comic Bug for me was having a chance to talk to Richard Isanove (who did the art on the Dark Tower comics that came out from Marvel, as well as the recent Savage Wolverine #14-17).  It was fascinating to talk to Richard about growing up in France and the different experience he had with comics in a market that was not overwhelmed by super-heroes.  Tintin, Asterix, and to my delight, I discovered he had loved Conan growing up, especially the B&W Savage Sword magazines and also the art of Big John Buscema, one of my favorites.  We chatted for a while and he offered to do a quick sketch for me, who did I want?  Whoever you want to draw Richard!  To my delight he chose to do Conan!  Watching the character form from a blank page was a wonder to behold: 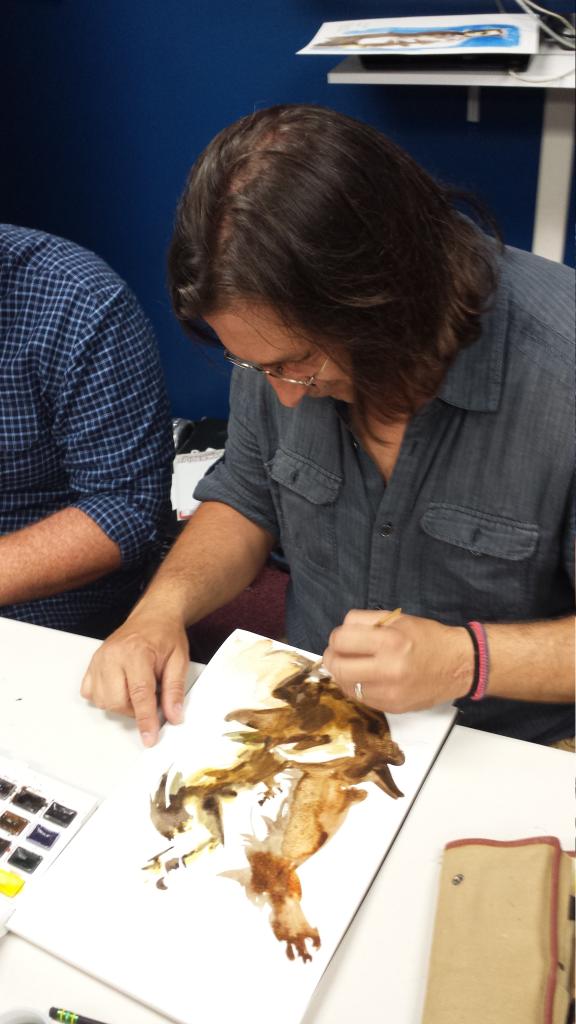 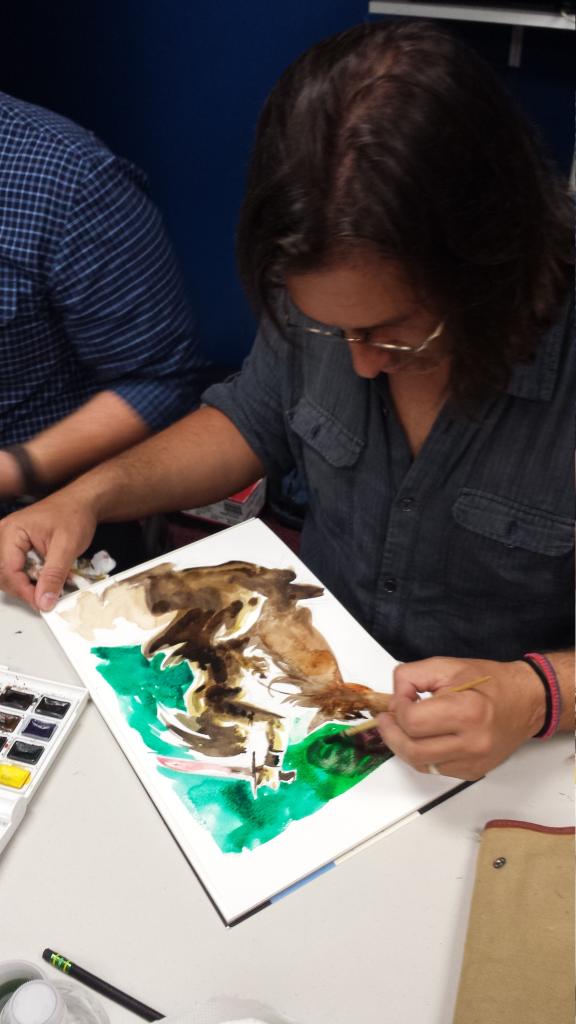 Original rough pencils were finished in watercolor, and the finished product is something my wife will allow me to hang someplace outside my comics room!  A rarity indeed! 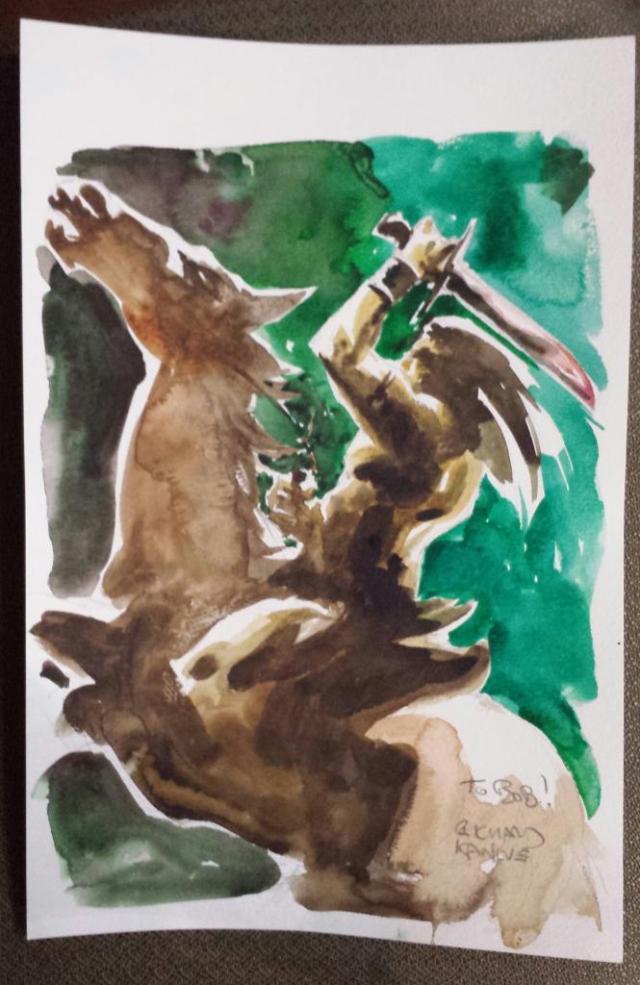 Good times!  By the time I had finished buying HCs (Get Jiro! and Science Dog) and some comics it was a bit after 1pm and after a bit of lunch I was on my way to my next stop: Biggy’s Comics & Games in Santa Ana. 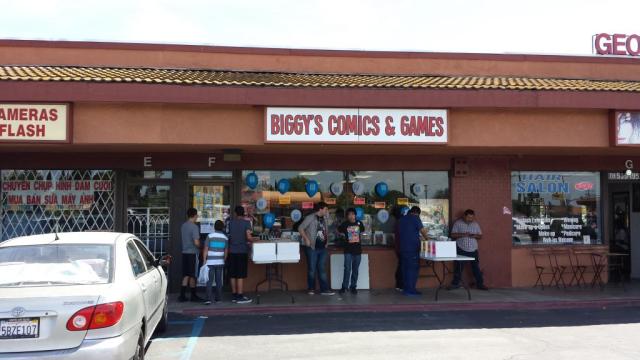 It was about 2pm by this point and things had considerably died down at Biggy’s.  Most of the free comics had long since been rampaged by fans who were there early (though they still had copies of Marvel’s Guardians of the Galaxy and DC’s Futures End and Teen Titans).  The big attraction here for me was the 40% off sale on TPBs/HCs and statues.  I got a great Spider-Man statue from Bowen Designs that was not yet in my collection: 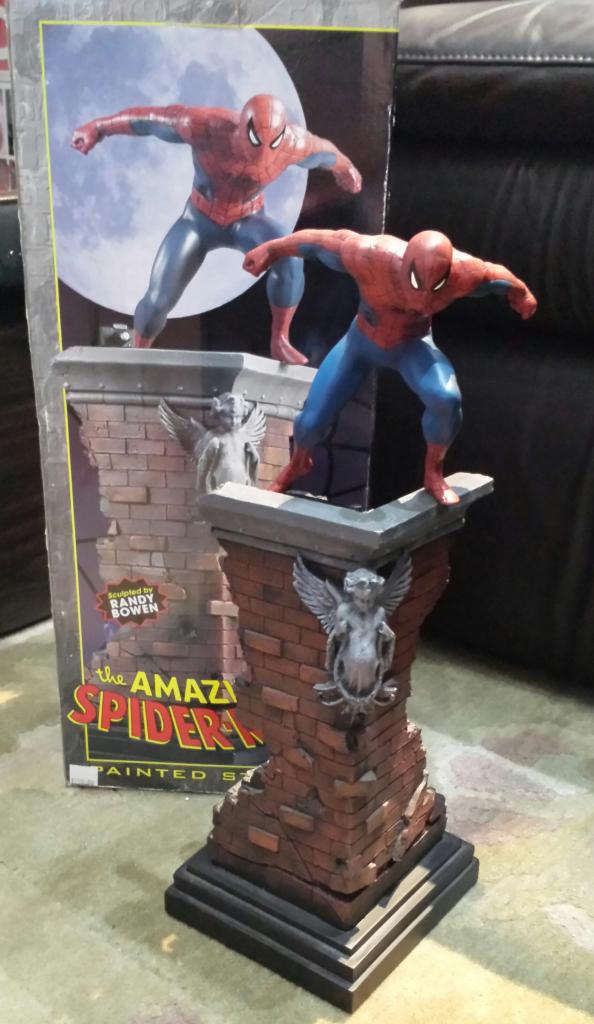 This is going to look great WAY up high with my Marvel statues; Spidey will be looking down upon my comics room from a lofty perch! 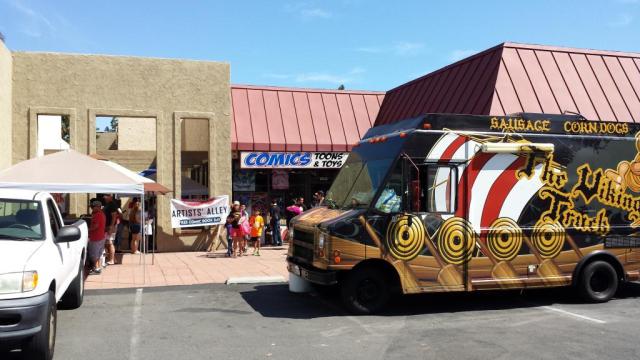 And then, at 3pm I ended up at my main weekly LCS (Local Comic Shop), Comics Toons’n’Toys in Tustin, CA.  They had a great setup.  They had a food truck, Easy-Ups for the artists, and a GREAT line up: Richard Garcia, Ray-Anthony Height, Dan Hipp, Abe Lopez, Todd Nauck, Peter Nguyen, Sarah Partington, Mike Vasquez, Larry Welch and David Winnick.  Most impressive was that they still had a wide variety of free comics at 3pm and a decent sized crowd was still lining up.  I made the rounds and picked up some nice stuff, including this sketch cover from Mike Vasquez: 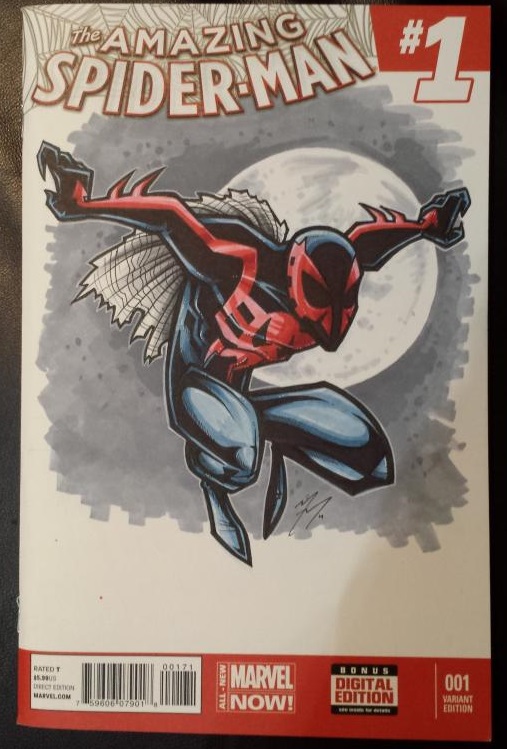 I ended up spending the rest of the day, until right before 6pm, here visiting with the artists, in particular the dynamic duo behind the upcoming series “Midnight Tiger” from Action Lab Comics, Ray-Anthony Height & DeWayne Feenstra!  Here I am with Ray: 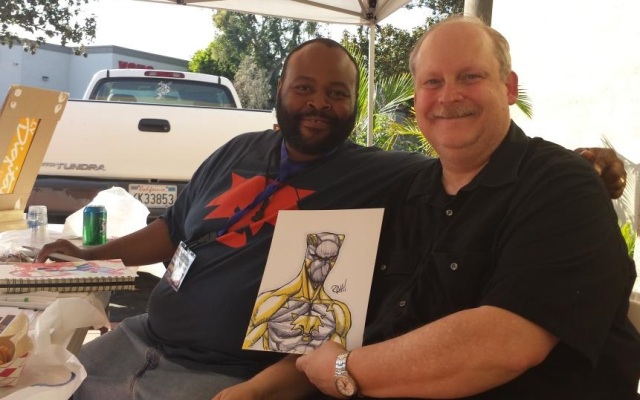 At the end of the day I found myself at home a bit more than 10 hours after I left in the morning having visited 4 stores, talked to more than 20 creators, picked up 6 sketches, collected more than 50 free comics, and bought 5 HCs, 50+ comics and a statue!  It was a convention experience packed into a single day and I feel fortunate for living in an area with so many great comic shops to choose from.  There were a LOT of shops I didn’t visit that I know were having events just as cool as the ones I experienced.

And THAT is why I love Free Comic Book Day…